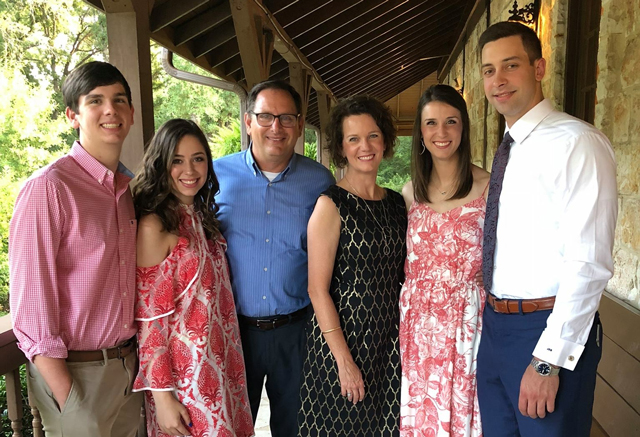 My name is Ed Walker, and my wife Sarah and I, along with our children, Cate, Caroline and Cole, enjoy welcoming groups to this special place throughout the year. We believe there is something significant that happens when we get away from our busy lives for a time to reflect and be renewed. At Sabine Creek, we’ve committed ourselves to serving others and providing a great place for our guests to grow in every area of their lives.

To that end, we provide delicious food, clean facilities, exciting recreation options, and best of all, a quiet and beautiful location where the sunrises and sunsets are just incredible! And all this just 30 minutes east of downtown Dallas!

Along with a special location, we have a wonderful team dedicated to making your stay here memorable. Whether you are going all out at camp, relaxing at a retreat, or celebrating a special event, our desire is to provide you with service and programs that are second to none.

Sabine Creek Ranch isn’t just our home. It’s a place we’ve dedicated to the Lord to encourage people in every area of their lives. We hope that while you’re here you’ll build lasting memories, strong friendships and a growing faith.

We look forward to seeing you soon!

Camp has had a major impact on my life.  I went to my first “away camp” at about 6 years old. I began my walk with Christ at a church camp in Jr. High, and met my lifelong friends at camp in high school. By college, I not only worked on summer staff – lifeguarding, serving meals, cleaning cabins, and every other odd job required – but also began leading music and speaking for groups of kids.  That continued for 15 years as I completed business school and seminary, married my awesome wife, Sarah, and we started our family. So I didn’t have to travel 300 days a year, I also began my journey as an entrepreneur.  I’m a lifelong musician, songwriter, and arranger/orchestrator, so I wanted to have a nice sound system when traveling to locations without one (like most of the camps I’d visited).  Because this was expensive, I bought the equipment and rented it out when not using it.  I also started a small recording studio and began producing projects both for others, and for myself.  This eventually expanded into other areas such as live event production, video production, media consultation and installation and publishing of the materials we produced.  During these years Sarah and I were also investing in real estate, buying, fixing up and renting or flipping properties. In 2014, after 30 years of professional involvement in camping, I was approached by Dallas Baptist University about sharing some of what I’d learned with their students.  As a result of those initial conversations, I now direct the Camp/Sport Leadership Degree program and the Center for Mentoring at the university. I love getting to not only interact with awesome students and the next generation of servant leaders, but to be a resource to camps from across the nation and even around the world. Whether it’s been through music, camping, ministry or business endeavors, Sarah and I are very blessed to have been impacted by amazing leaders, mentors, and friends and are grateful for the opportunity to share those blessings with others.
One of Ed Walker’s written goals coming out of college was to launch a camp and retreat center one day.  Having already seen the impact of camp on his own life, as well as on thousands of others as he led at camps, he knew camp was more than just a week of fun, but a place where kids met friends who would be friends for life, and where they were stretched and grew physically, mentally and spiritually. In 2003, the Walkers purchased the 330 acres of what is now Sabine Creek Ranch on the eastern side of Rockwall County, just 30 minutes east of downtown Dallas.  A working cattle ranch and equestrian facility at the time, it is bordered by several thousand acres of flood plain, which protects it from the surrounding development. The Walkers began selling their real estate investments to build cabins on the property, and were blessed by the sacrificial help of friends, family and sometimes complete strangers! “It’s almost hard to imagine the work that went into those earliest years.  We cooked in a catering trailer loaned to us by a friend, and held our meetings under a tent.  Storms would come through each summer and blow the tent down, along with all our sound and equipment!” In spite of the rustic environment, groups continued to come and spread the word about Sabine Creek.  “Though we were just getting going and didn’t have a lot of ‘extras’, we tried to focus on great food, clean facilities and awesome staff.  We found those were the main ingredients to a great camp or retreat experience, and though we’ve added amenities since then, we continue to focus on those three key elements.” In the subsequent years, the camp expanded to include cabins and hotel rooms that hold up to 350 campers for overnight events, fully-equipped meeting spaces for hundreds or a handful, a dining hall with commercial kitchen, office space, and a host of recreational options including a high ropes course. In 2018, Sabine Creek Ranch is celebrating 15 years of positive impact! “How amazing it is to think of the many tens of thousands of children and adults who have come here since we started.  Simple things like a hayride and singing around a campfire, a son catching a fish with his dad, the nervous excitement of staying away from home for the first time, or hearing a challenging message…all these things really do make an impact and change lives.  What a privilege to get to be a part of that!”